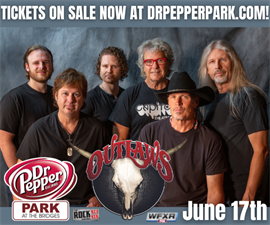 The Outlaws at Dr Pepper Park

The Outlaws at Dr Pepper Park

ALL SHOWS ARE RAIN OR SHINE
Schedule subject to change without notice
Gates Open at 6:00pm
Shuttle service begins from the Carilion Riverwalk Parking Garage at 5:45pm.
The Bank of Botetourt box office opens on site at 6:00pm.
Will call is located where tickets are sold at the entrance.

We accept cash or credit cards. Outside food and beverages are NOT permitted. Food will be available onsite from local food vendors. Beverages for the concert will include Pepsi products, beer and wine from Blue Ridge Beverage.
We do have an enforced designated smoking area at the venue.
PARKING: Please park at the Carilion Riverwalk Garage (beside Honeytree) and ride the FREE shuttle sponsored by Downtown Roanoke Inc. It is a very short ride that delivers you right to the front gate! You will see directional signage on South Jefferson when you get close.
SEATING: Bring your own or rent one of our chairs at the event. Chairs can be rented at the Beer ID tent.
For The Outlaws, it’s always been about the music. For more than 40 years, the Southern Rock legends have celebrated triumphs and endured tragedies to remain one of the most influential and best-loved bands of the genre. Today, The Outlaws have returned with new music, new focus and an uncompromising new mission: It’s about a band of brothers bound together by history, harmony and the road. It’s about a group that respects its own legacy while refusing to be defined by its past. But most of all, it’s about pride.
It’s About Pride was also the title of the band’s acclaimed 2012 album, universally hailed as their victorious comeback. “Because The Outlaws had been out of the public eye for so long, it was almost like starting over,” original singer/songwriter/guitarist Henry Paul explains. “But because of the band’s history, we’re still seeing this as a new chapter. What our fans loved then is what they still love now, because we are just as good or even better than we were.” For co-founding drummer/songwriter Monte Yoho, the journey is both bittersweet and jubilant. “I still think about the friends we made when we first came into this industry, how we struggled to define this thing that became known as ‘Southern Rock’,” Yoho says. “The Outlaws still embody all the things we shared musically and personally, most of all the relationship we have with our fans to this day.”
The Outlaws are now headed back on the road, back on the radio and back into the hearts of fans nationwide. “I’m seeing this thing we’ve had for more than four decades be exposed to whole new audiences,” Monte Yoho says. “We’re having a second life as a band, and it feels better than ever. Best of all, I’m still doing it with some of the same people I’ve known for most of my life.”
“I want people to see our show, hear our new songs and realize that The Outlaws are back,” says Henry Paul. “Our goal is to unite the fans and bring the band back into the light. In a way, this is like a second chance at my first love. It’s about finishing what we started.” For Henry, Monte, Dave, Randy, Steve and Dale, it’s also about a band of brothers who love playing their own brand of rock, and who 40+ years ago first got the chance to share it with to the world.
For The Outlaws, it’s still about the music. And now more than ever, it’s about pride.

Video tour of Dr Pepper Park is available on our website. DrPepperPark.com